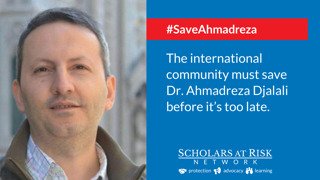 We, the undersigned organizations, call on the European Union, European state governments, and the United States government to act immediately to secure the release of Dr. Ahmadreza Djalali, an internationally recognized scholar of disaster medicine wrongfully sentenced to death and in dire need of medical care. After a particularly horrific year for Dr. Djalali’s family, their fear for his life has surged given his rapidly deteriorating health and the recent election of Ebrahim Raisi, a hard-line judge who sentenced thousands of political dissidents to death, as the country’s next president.

Dr. Djalali is an Iranian-Swedish scholar who has held academic positions at universities in Belgium, Italy, and Sweden. In December 2020, he was awarded a Scholars at Risk Fellowship at Harvard University, in the United States.

In April 2016, Iranian authorities arrested Dr. Djalali during a trip to Iran to participate in a series of academic workshops. On October 21, 2017, Dr. Djalali was sentenced to death for “corruption on earth,” based on unsubstantiated allegations that he had provided intelligence to the Israeli authorities. Dr. Djalali has disputed the allegations, asserting that his ties to the international academic community are the basis of his prosecution. Dr. Djalali was denied the right to appeal the conviction and sentence, and over the past five years, has suffered from torture, ill-treatment, and a growing number of medical complications while in state custody.

For years, Dr. Djalali has been denied access to appropriate medical care for numerous health complications that worsened while he was in solitary confinement. These include leukemia, severe weight loss, chronic gastritis, low heart rate and hypotension, gallstones, partial paralysis of the right foot, indirect inguinal hernia, hemorrhoid and fissures, low blood cell count, low levels of calcium and vitamin D, malnutrition, dyspepsia, and depression. Dr. Djalali’s family fears that if authorities continue to deny him access to medical care, he will die in prison.

Dr. Djalali also continues to be denied access to his lawyer and his family in Iran, and from making calls to his wife and children in Sweden. Without visitations and phone access, Dr. Djalali’s family can only await state media reports to learn more about his situation.

President-elect Raisi has a concerning history of human rights abuses and extrajudicial executions. Notably, in 1998, President-elect Raisi served on a four-person committee that ordered the execution of about 5,000 political prisoners. Starting in 2019, President-elect Raisi, as the Head of the Iranian Judiciary, oversaw the arbitrary detention, prosecution, and the growing use of the death penalty against a number of scholars, human rights activists, and dissidents. We share Dr. Djalali’s family’s concern about how Raisi’s presidency might impact Dr. Djalali and other wrongfully imprisoned individuals.

The international community must race to secure Dr. Djalali’s immediate release and his subsequent access to medical care. We therefore urgently call on the European Union, European state governments, and United States government officials to take all available actions to secure the release of Dr. Djalali before it is too late.