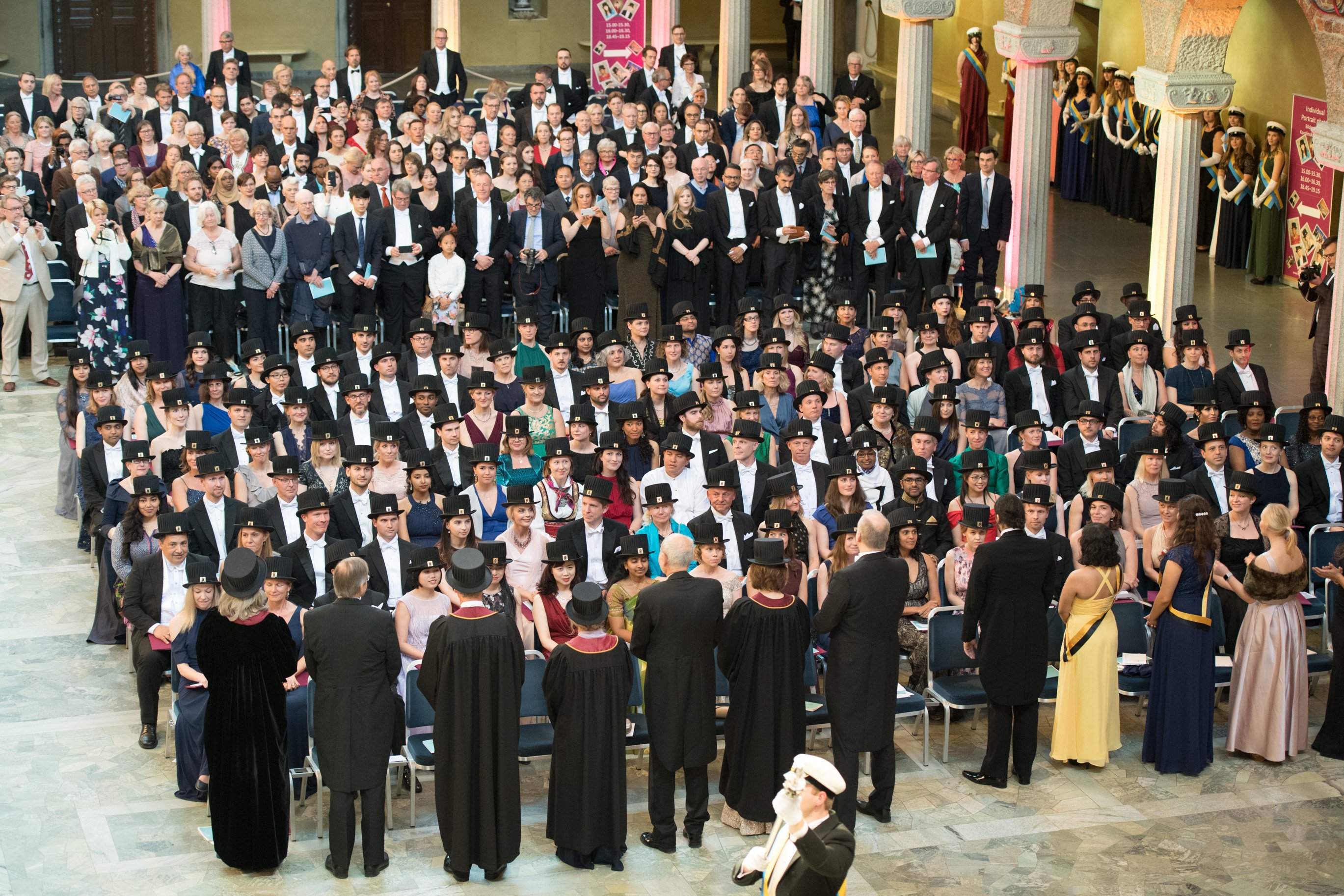 4 May was an historic day for Karolinska Institutet. For the first time in its history, all the new honorary doctors celebrated in Stockholm City Hall, along with the university’s new PhDs, were women. Bringing science to the people is a passion they all have in common.

The City Hall was at its most beautiful. The Blue Hall was bathed in sunlight and the gold in the Golden Hall sparkled as all the new doctors of medicine were saluted with cannon fire from the waterfront.

The first ones to descend the marble stairs were the three new honorary doctors of medicine at Karolinska Institutet. Journalist Suzanne Axell, science writer Yvonne Enman and doctor Ingrid le Roux were all noticeably moved and clearly overwhelmed by the award.

“Sometimes you do unsexy things – I had just emptied the cat’s litter tray when the call came,” says Suzanne Axell, presenter of the popular SVT programme ‘Fråga doktorn’ (Ask the Doctor). “It was a fantastic feeling.”

“It was 4.30 in the afternoon and I had just closed and left the office, as I always do for security reasons, when Dean of Research Anders Gustafsson called,” says Ingrid le Roux, who works in South Africa. “It’s such an honour.”

“It was a Friday afternoon and I was in the Coop foodstore,” says Yvonne Enman, who also teaches at Karolinska Institutet. “I wasn’t going to answer at first, but I saw it was a KI number so I did and what a surprise!”

The ceremony kicked off with a formal address by KI Vice-President Karin Dahlman-Wright, who praised the important work done by the new honorary doctors in bringing science closer to the general public, stressing the value of patient-centred work and of reaching out comprehensively in a global world.

“Our new honorary doctors are role models with it comes to reaching patients and involving the whole of society, and they are also role models for women for generations to come,” she said, and thanked them for all they had achieved.

Professor Dahlman-Wright also talked about how important it is to protect scientific facts in a world in which information easilycan be distorted.

Dean of Research Anders Gustafsson, who conferred the actual honorary titles at the ceremony, developed the theme: the importance of attaining a solid partnership between society and the healthcare sector and of global health work.

A close to many years of doctoral study

“It pleases me greatly that for the first time our new honorary doctors are women, all of whom have made a great difference to humanity and each of whom has her own way of bringing health issues to the fore. Suzanne Axell by presenting the latest medical research to a broad general public in ‘Fråga doktorn’; Yvonne Enman by working together with teachers, patients and researchers and using her own time as a patient to ensure that research is put to practical medical use – she really understands the patient experience; and Ingrid le Roux through her outstanding work for women and children in Africa.”

The PhDs in medicine were conferred by the Dean of Doctoral Education, Marianne Schultzberg. One by one they received their doctoral hat and diploma. The conferment ceremony – the grandest of all academic ceremonies – brings to a close many years of doctoral study.

The entertainment during the ceremony and subsequent banquet in the Golden Hall was provided by soprano Paulina Pfeiffer, baritone Karl Magnus Fredriksson and dance Lilly Zetterberg, accompanied by Roland Pöntinen on the piano. The ceremony was rounded off with an exit parade to the strains of Suite Gothique.